The Fifth Story opens with an account of the death on 15th February 1854 of Eleanor Prosser, Richard’s mother, at the age of 90 and of her burial in Birmingham’s Warstone Lane cemetery.

It continues with an examination of Richard’s introduction by his friend Bennet Woodcroft, in his role as the Assistant to the Commissioners of Patents, into a manufacture in which Richard does not previously appear to have had any experience - that of firearms.

It was an involvement which was to take over the remaining few months of Richard’s life and which, according to one of his obituarists, may have contributed to his unexpected early death.

The introduction led to Richard being called to give evidence in early March 1854 before a parliamentary Select Committee that had been appointed to report on the improvements that could be made to the procurement of small arms for the British army in the light of Britain’s likely imminent participation in the Crimean War.

The Committee heard evidence from two opposing sides - the Ordnance Board (the procurement department of the army), which wanted to enlarge and mechanise its own armouries, and the private, largely unmechanised, gun trade, which was still the main supplier to the Board and was mostly based in Birmingham and the Black Country.

Richard’s evidence to the Committee was described as among the most significant of the witnesses’ testimonies by one modern commentator. Richard had actually been called as a witness by the Board, but his testimony may not have been entirely to its liking.

The contents of a draft letter (held by the British Library) written three weeks before his death to a senior officer of the Board, suggest that Richard, nevertheless, entertained some hopes of securing a contract from the Board to fund the development by him of machines to manufacture each of the constituent parts of a firearm. At the time he was probably unaware that such negotiations were already underway between the Board and one of the other “significant” witnesses before the Select Committee - the renowned mechanical engineer Joseph Whitworth.

An account of Richard’s death and its aftermath (the forced sales of his machinery and other contents of his Tube Works and of most of his library - in which his brother Thomas may have played a part) is followed by brief histories of Richard’s descendants including that of the unnecessary death of his second son aged 20 when fighting as a “Garibaldian” in Italy - an adventure that ended tragically. The donation by some of Richard’s children in 1873 of the “Prosser” memorial stained glass window, dedicated to their parents, in St. Nicolas’ Church, Kings Norton is, also, described; it was manufactured by Hardmans, the renowned Birmingham firm that has made occasional appearances in the earlier Stories of Richard’s life.

The very contrasting fortunes of Thomas Prosser and his descendants in the United States are told in the penultimate chapter. Richard’s brother prospered later in life as a result of a meeting in 1851 at the Great Exhibition with Alfred Krupp, the Prussian steel and arms manufacturer. The contents of a fascinating letter written by Thomas in Montgomery, Alabama at the outset of the American Civil War in which he sought a meeting with the Confederate President Jefferson Davis are discussed. The close business and personal relationship between the American Prosser and German Krupp families was to continue for nearly a century - until the United States joined in the Second World War.

The Story ends with some final thoughts of the author about the subject of her biography, including those arising on the late discovery in 2021 of a more detailed press report in 1846 of the Prosser v. Bayliss slander proceedings 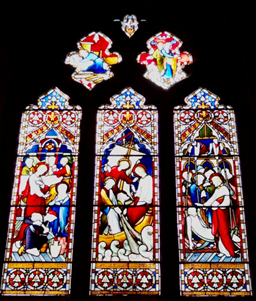