Tubes: A Wealth of Trouble

“A Litigious Nightmare”, Part 1 of The Third Story, recounts the background to Richard’s fifth English patent and the history of the ensuing devious business dealings and tangled web of litigation that followed its grant in March 1840.

The patent was for machinery that was quickly recognised to be a major advance in the industrialisation of metal tube manufacture and was said to have remained the predominant method of manufacturing one important type of tube for decades after the patent’s expiry (and Richard’s death). The tubes in question were (inter alia) used in enormous quantities in the boilers of the engines of the then recently invented steam trains and, also, steam ships (passenger, merchant and naval) in Britain, in Europe and in the U.S., where Richard’s New York based brother Thomas acted as his import agent.

The patent was to be at the centre of litigious battles between competing Birmingham and Black Country tube manufacturers (and the investors in their businesses) which were to continue throughout the 1840s. Battles that were argued before the highest courts in the land culminating in hearings in the House of Lords and before Chief Justices, the Master of the Rolls and the Lord Chancellor. Battles with which Richard was directly involved.

Aspects of this history have been touched upon by others, but the full story would have been virtually impossible to unravel by historians before the advent of the Internet facilitated the discovery and the digitisation of so much of the relevant source material.

One later historian, at least, must have had an intimate knowledge of most, if not all, of the facts. However, Richard Bissell Prosser, Richard’s eldest son, chose not to disclose these in his articles on the development locally of the country’s metal tube industries which were published in the Birmingham Weekly Post in 1880. He did allude to the “curious particulars of the rise of the iron tube trade” but refrained from elaborating on this intriguing comment.

Part 2 of The Third Story is comparatively short. It covers: Richard’s tenth English patent, granted in 1850, for his “anti-welded” tube machinery of which “Great things were expected” according to his son; his 1852 patent for an idea that may have contributed to the later development of the seamless tube; his controversial unlawful second “marriage” in 1850 to Hannah, his deceased wife’s sister; a trip to Germany, also, in 1850; and more on the transatlantic collaboration with his brother Thomas.

Tubes: A Wealth of Trouble Part 1: A Litigious Nightmare - Download a PDF version 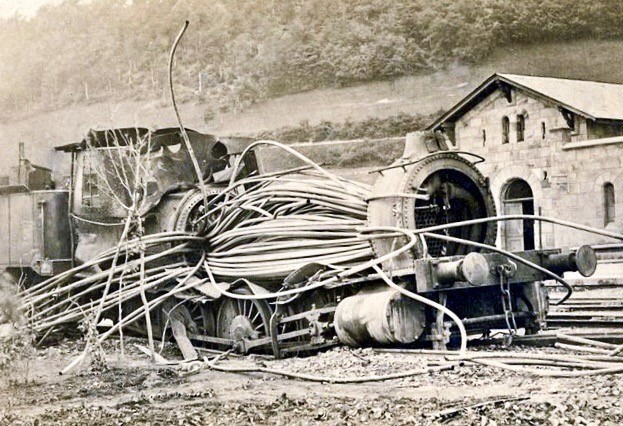 Image : attributed to boiler explosion of the steam engine “Warburg” of the  Royal Westphalian Railway Company in Altenbeken  station on 1st June 1869 (Pinterest)